skip to main | skip to sidebar

I'm too tired to do any drawing this evening (it's been a loooong week), so I thought I'd share a nice little picture I did back in 1989. I'll send a free copy of my book to the first person to identify all of the personalities... 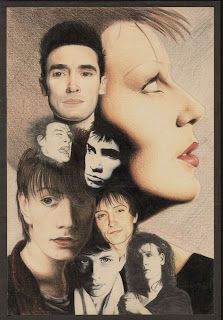 16 pictures left to go! I inked the Belle & Sebastian one this evening and now I've got this gorgeous hi-res b&w picture of Jarvis to ink tomorrow and a nice long Bank Holiday weekend to look forward to...now if only the sun would come back out... 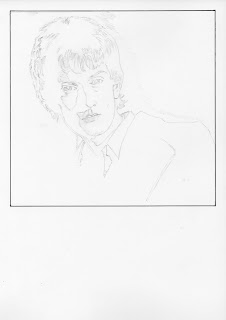 Yet another book sold last night! I'm so looking forward to getting this printed. I'll give you a rundown of the pictures I still need to do on May 1st (hopefully not too many by then). Here's the Stuart Murdoch pencil draing I did this evening after inking the last but one New Order picture. I think I'll be putting a picture of Isobel on the cover of the book he's holding... 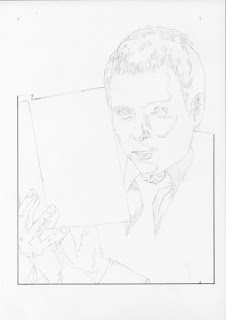 Chumbawamba & Credit To The Nation

Another book sold on ebay today - woo-hoo!
Here's tonight's offering, the first of two 'collage collaborations. The next one will be Inspiral Carpets and Mark E Smith (giving me yet another drawing to do!) 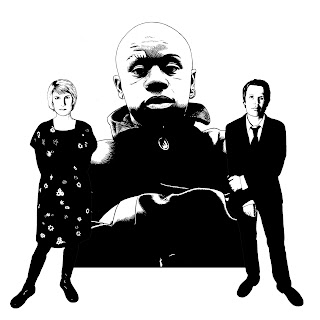 Labels: Chumbawamba with Credit To The Nation

Credit To The Nation

Pavement inked. This one drawn. Need to add Chumbawamba to it as well somehow... 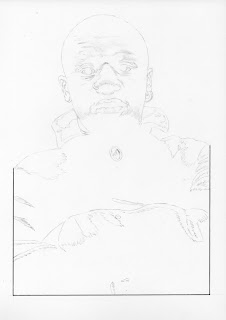 Labels: Credit To The Nation 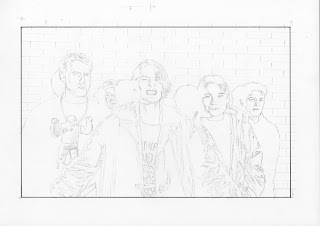 A big thank you to Steve over at Teenage Kicks for including a very nice write up of the book and blog.

The rest of my year will hopefully look like this:

May: finish drawing and inking the last 18 pictures
June: get the book formatted and sent to the printers. Get a proof copy then correct any mistakes (there's always something I miss!!)
July: send a few comp copies out to various radio stations and publishers
August: send out the preordered signed copies
September: promotion, promotion, promotion
October: try to sell a few copies at the British International Comics Show
November: make a start on the next book (keep watching this blog for details)
December: copies to be given away as prizes during the broadcast of the 2010 Festive Fifty broadcast on Dandelion Radio

No picture today I'm afraid, I've been over to Leicester for the weekend to dance and drink with a few old friends. Hopefully my hangover will have subsided enough by this evening to get that Robert Wyatt picture inked!
Posted by Lee Thacker at 05:20 No comments:

I thought I'd just post the initial pencil drawings from now on...never thought to scan them before... 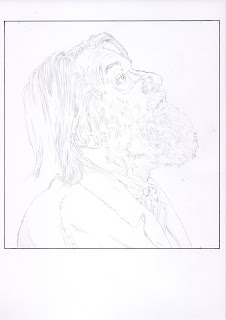 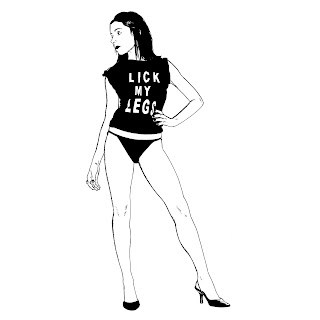 Well, after two sun drenched days sitting in the garden and returning to work today, I'm back at the drawing board this evening about to pencil the final Ian Curtis picture. I just finished inking Mr Rotten... 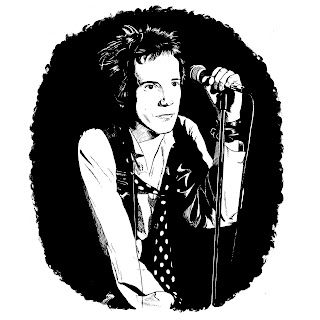 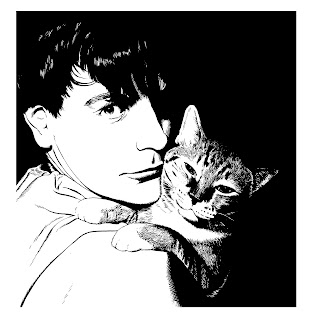 The week from Hell continues apace. First, the phone line went down outside our house and had to be replaced. Next, my computer was infected with a virus so I spent most of today with a Dell engineer and have been reinstalling all my applications myself for the past four hours! I've also had to try to rememeber all my passwords for various sites! Plus, next door's big dog knocked down the fence and came into our garden, terrifying our cats. Grrrr. 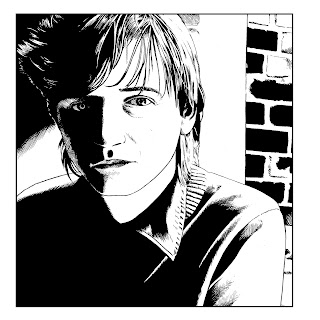 I've got to have my computer rehauled due to a virus that even McAfee couldn't stop so I may be away from the blog for a while; storing stuff on my external hard drive, reinstalling all my applications etc. I'll still be busy drawing though! In fact I spent the afternoon inking a picture of Culture while talking on the phone to a Dell representative as he checked my system over. I got this one done last night... 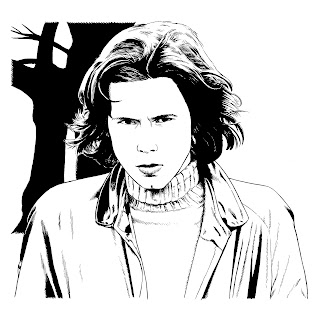 Blimey, I'm getting slow...I thought this one would be a quick and easy one but it seemed to take forever! I've still got 25 pictures to draw (27 if I decide to include Led Zep and The Motors, which I should really, so that means two more pages to write too!) The book is coming along nicely though and I'm grateful for the massive support I've received from the Castles In Space and Always Searching For Music blogs - thanks guys!
Don't forget: the limited (1000 copies), signed and numbered edition can be preordered on ebay at any time, or if the link is dead by the time you read this, simply type in a search for John Peel Festive 50 Illustrated intro by David Gedge. You can also preorder direct from me via Paypal to my email address. Only £10 (+ £1.50 postage and packing) for over 150 pages of Festive Fifty memories and illustrations. Don't miss it! 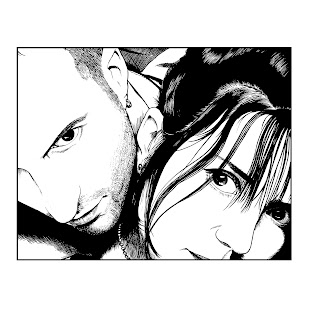 I managed to get the last of The Smiths pictures drawn today too... 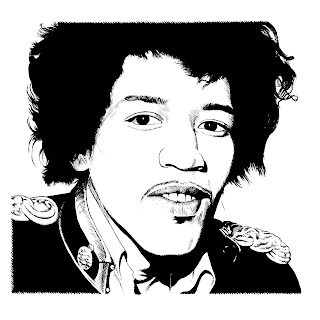 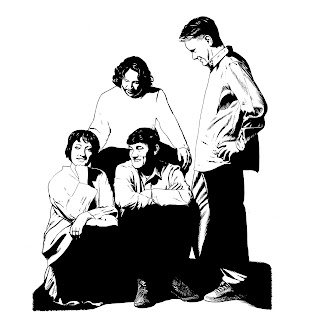 I've still got to draw two more pictures of these guys (plus one more of Joy Division too)!
Posted by Lee Thacker at 08:37 1 comment:

Not so sunny today, but I still managed to catch a few rays. White wine this evening. David Gedge emailed me his introduction for The Book (and very good it is too). Spent the morning drawing the picture below... I sold another book on ebay today too - let's hope the interest keeps up! Having a few internet problems of late, think I need a new router, it keeps cutting out. I can't seem to do anything on my beloved Facebook either - bloody cyberspace!!!!
Posted by Lee Thacker at 10:11 4 comments:

Yet another picture that won't be making it into the book!

I'm thinking of producing a limited edition portfolio of my ten favourite drawings, printed on high quality card stock and housed in a hand made 7" envelope, signed and numbered, limited to 100 copies. It might make a nice addition to the the book; watch this space for details.

I sat outside in the sunshine today, drinking red wine and drawing Morrissey (still 3 more Smiths pictures to do!!)

I also heard from Rocker, who presents a show on Dandelion Radio, the internet radio station that has carried on the tradition of the Festive Fifty since 2005. I'd been meaning to contact Dandelion Radio anyway in the hope of offering a few copies of my book as prizes when they do this year's countdown. Fingers crossed... 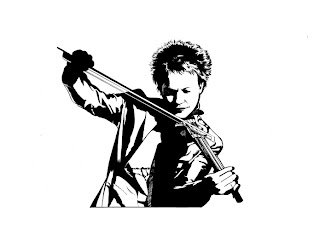 Yay! Great news! The wonderful blog Castles In Space (see my links on the right and take a visit - you won't regret it) has put up a special guest post bigging up the book! Thanks Nolan! I also received The Only Ones' contribution today; some of their thoughts on John Peel and about being voted to number 18 in the all time Festive Fifty 2000 which will be appearing in the book. 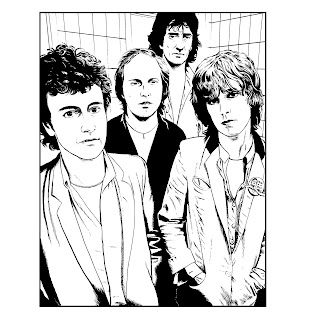 Labels: The Only Ones

Woo-hoo! At last! I managed to track down a decent photo of the band Bang Bang Machine (on last.fm of all places!) Now if only I had a hi-res picture of Saloon I'd be sorted... 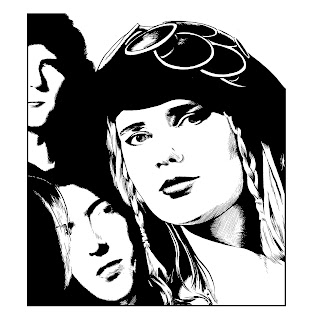 Well, the last.fm John Peel group seem to be ignoring my posts and messages for some reason...all I want is to spread the word and get some feedback/opinions on my forthcoming book...if they're not interested, who else is going to be? Am I just wasting my time? 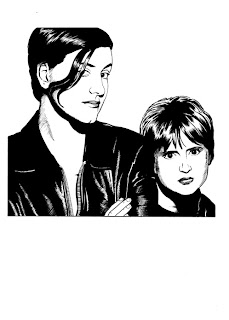 The above picture won't be in the book. Not that anybody cares...
Posted by Lee Thacker at 07:34 6 comments:

Full steam ahead! Two pictures in one day! Here's one of them... 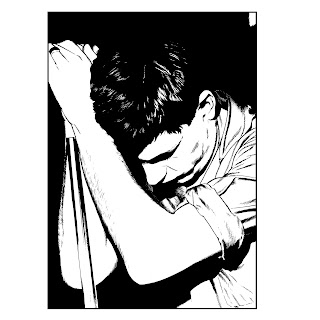 The other one is of Morissey and Johnny Marr, but you'll have to buy the book to see that one! Ha ha ha!
Posted by Lee Thacker at 11:36 No comments:

I'm currently at work on the remaining 40 or so pictures I need to do that WILL be appearing in the book. Meanwhile, here's another one that won't be! 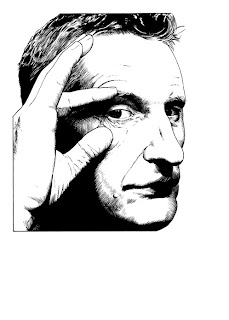 I've still got another five Joy Division pictures to draw!! 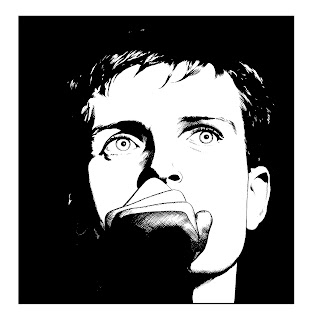